What a month February turned out to be!

5,467 bottles (full sized bottles, single lots of single malt) were sold at auction in the UK, that’s the highest volume of bottles seen on the open market in one month. Monthly volumes have never quite managed to break through the 5,000 bottle barrier… as an indication of how vast last month was, February 2015 saw 2,690 bottles sold. To a large degree, this supply-glut was down to Scotch Whisky Auctions zero seller’s commission offer which gave a boost to the figures. Include memorabilia, blends, bundled lots, grains, mini’s and everything else sold through whisky auctioneers in the UK and, in total, there were 9,587 separate lots to bid on!

Bottle of the Month…

…Goes to McTears Auctioneers in Glasgow for bringing to market the only bottle ever produced of a 60 year old Dalmore for Drew Sinclair’s 60th birthday. A 1939 60 year old and just one bottle in existence… it doesn’t get much more desirable than that. Interesting to see a top end Dalmore in a little more sedate packaging too. At £7,500 it’s not the most expensive Dalmore ever, and while it’s a rather odd thing to say at this price point, it actually looks like good value for whoever bought it.

The Month in Focus

Following January’s rather buoyant start to the year, in light of February’s massive increase in supply, we were bracing for an almost unilateral dip in values.

With the exception of one major index (Port Ellen) we witnessed some of the single largest ‘in-month’ increases we’ve ever seen.

An exceptional month for Scotch

The broadest measure of how Scotch is performing on the open market is the Apex1000 index.

December 2015 saw the index step back ‘in-month’ at the year-end by -0.02%; we know a massive supply month can directly impact value growth, and it’s not the first time we’ve seen this. While -0.02% is no crash, it’s still not the right direction for values.

Contrary to expectations, the Apex1000 increased by a significant

1.73% in February. It would seem that while supply is increasing it’s

being continually outpaced by demand. Looking at a year on year

fewer than half the number of bottles on the market. 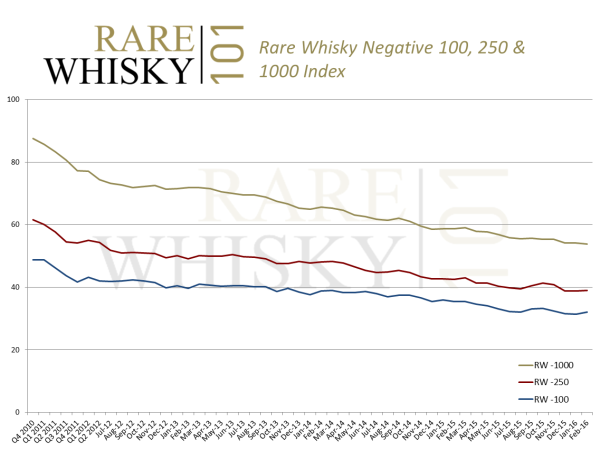 Ranked in order of performance, February’s indices look like this –

Historically, rather more sedate than other indices, the Rare Malts Selection Index took the reins with a 6.27% increase. Impressive, but we’re not convinced these gains will be cemented. Late 2015’s December-dip saw 2.34% wiped off a full collection of Rare Malts, so we could be seeing a natural correction.

Below is an extract from our 2014 full year investment report talking about Macallan’s 25 year old Anniversary Malts and the earlier release 18 year olds. Respectively, these indices moved up by 3.77% and 3.57% throughout the whole of 2014.

Current sentiment would appear far more positive for these stunning older bottles as they took to incredible gains last month. Increases throughout February alone out-stripped performances for the whole of 2014.

Karuizawa values stabilised during February as the index increased by a fractional 0.40%. Have we reached an equilibrium for Karuizawa values? We’re not so sure…

Then there was poor old Port Ellen! 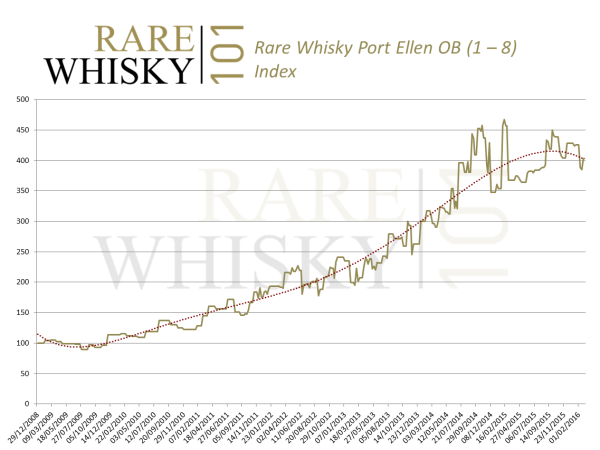 A far cry away from the Port Ellen Index’s Feb 2015 all-time high closing position of 456.77 points; twelve months later and we see almost 12% wiped off the value of a collection of Port Ellen OB’s (releases 1 – 8 incl). Values moved north throughout the whole of 2015 by over 23% but, even removing some of the price spikes, like the one in Feb 2015 (full collections being completed maybe?) and the chart suggests we might have reached the top of the current cycle. Could values plateau or even cool a little for the most iconic of silent distilleries?

Aside from Port Ellen’s erratic behaviour and a lacklustre performance by the Vintage 50 index, general values advanced impressively amid the challenges of our largest volume month on record and continued turmoil in other markets.