Could that happen with whisky?

No, you’ll always have a bottle… More importantly (unless the broader economy implodes and we all go back to cooking on an open fire), do we see Port Ellen 1 st release ever settling back to £100 a bottle or a Connoisseurs Choice Kinclaith 1966 ever being sold for its original retail price of £19.74? Again, simply no – no we do not.

BUT… do we believe in overheated markets being the subject of a significant correction, protracted slump or even a crash? Absolutely, we have to. Glenmorangie values almost halved within three months through late 2010/early 2011. Their values have now just clawed back their losses to reach pre-crash levels; it’s taken five years for a full recovery.

Over recent months, Karuizawa values have increased at a rate the broader whisky market has never seen. The Rare Whisky 101 Kauizawa Index was established on the first of July 2013, so it’s our most recent index. Exactly one year later, the index had increased from its base of 100.00 points to 146.83. That 46.83% increase outstripped Scotch, nothing could compete; but equally that would pale into insignificance compared to the gains we would see over the subsequent 12 months. 146.83 points on the first of July 2014 became a staggering 384.61 twelve months later on the first of July 2015. That’s a 161.94% increase. The index peaked at 399.32 at the end of July this year. 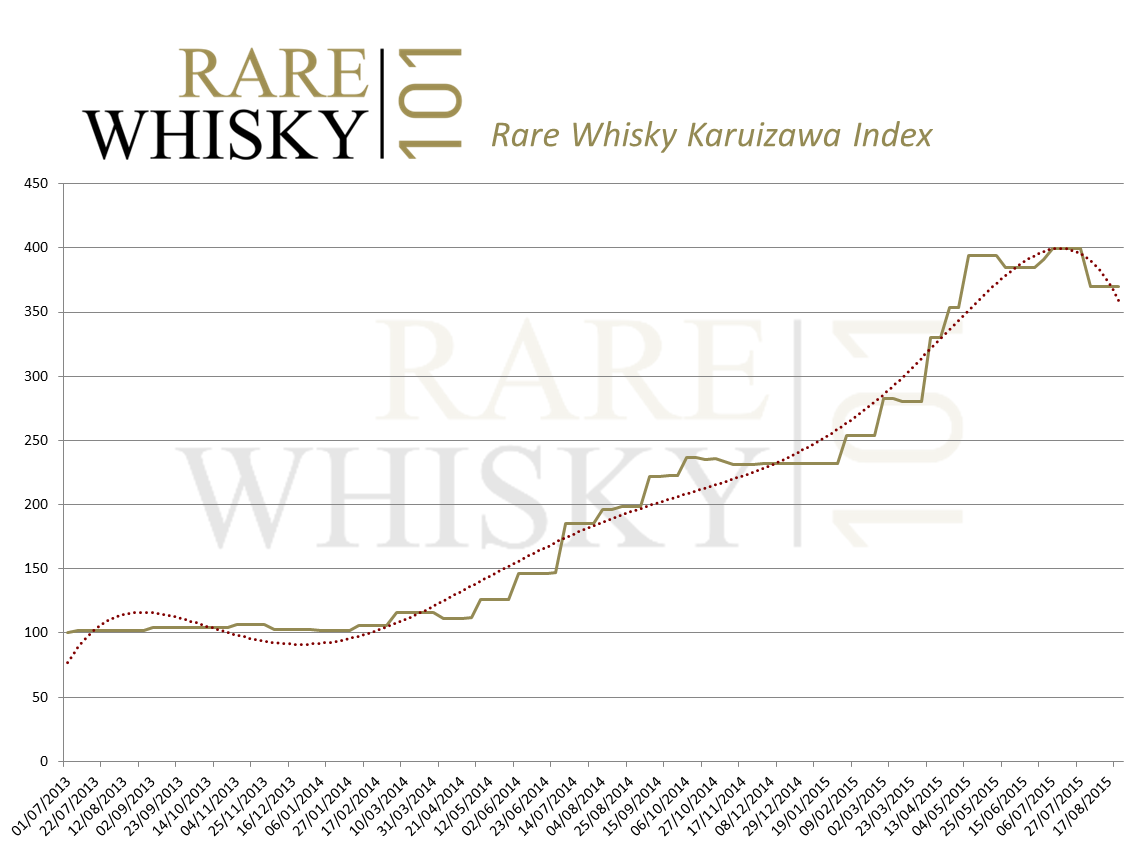 From a broader pure cost perspective, two years ago, the single cask 1980’s vintages were selling for between £600 and £800 per bottle (We’re not going to look at original retail prices because, quite frankly, it all gets a bit silly). In many cases these prices are now in the region of £2,500.

All this comes at a time when a bottle of 1960 vintage Karuizawa takes the record for the most expensive bottle of Japanese whisky ever sold (Bonhams Hong Kong £77,000). We would like to see a bottle sold at auction in the UK to see how values compare… But even in Hong Kong, hammer prices for certain bottles eased back from previous highs. The 1967 (cask 6426) sold for c£15,000 in May and made c£12,000 at the August sale.

£77,000. The most expensive bottle of Japanese whisky

The market looks overheated. £2,500 for a bottle of ANYTHING is a massive price to pay. Bottles of 1950 vintage Macallan can still be obtained on the open market for that amount. Karuizawa almost defies logic in terms of the prices being paid.

It doesn’t look like over-supply’s the culprit – The last six months have seen the number of bottles sold at auction in the UK remain relatively low and August even took a notable step back from July’s high (number of bottles sold – March 70, April 70, May 50, June 41, July 87, August 57).

7.41% is a steep drop in one month, so should we be worried? In our opinion we should realistically expect to see a continued short-term decline in values (at best a period of stability). We’re not expecting anything like the sort of 50% losses Glenmorangie suffered in 2010, however, we do see the current market as being in need of a natural correction before a more uniform pattern of growth is established. As a positive counterbalance to that, we need not forget that Karuizawa is almost gone from the cask and much of the (earlier releases anyway) bottled stock has been drunk.

Rarity and quality will absolutely continue to play a vital role in values – and Karuizawa has both in spades.

While it’s clearly impossible to know exactly how this will play out in the long run, we would certainly advise caution for those buying at the moment (particularly as an investment).

As Karuizawa experiences its most significant drop to date, how has the rest of the market performed?

The other notable performance was the official Brora index which fell 6.04% through August. The Brora index peaked at 396.63 points in February 2014 and currently stands at 332.15, yielding a peak-to-present-day loss of 16.26%.

The Macallan 25-year-old Anniversary Malts took a slight decline through August with the 18-year-old’s remaining flat at zero growth. The remaining indices look relatively stable. Encouragingly, the benchmark Icon100 increased 1.47% and the Apex 1000 moved up by 1.66%.

As we move rapidly towards the early winter months of 2015, we head into what is traditionally the busiest time of the year. Supply usually peaks in October/November and with more bottles sure to go under the hammer than ever before, we find ourselves asking what might happen if there’s a Karuizawa late-year sell-off? Can demand keep pace if volumes do rapidly increase or will we see extended losses? We can’t forecast the answer but we will certainly report the results.