Building on last weeks positive outcome for Macallan, older vintage bottles appear to be shifting north; in some cases rapidly. It’s no secret secondary market values for Macallan had a relatively tough time throughout 2014. With a cross-brand all-bottle decline of 7.43%, the king of collectables took a relatively wide-reaching correction in investment terms.

Four 25-year-old Anniversary Malt’s were sold with two achieving outright new records and the other two trading at the top end of recent prices.

On a more contemporary basis, while the ‘M’ decanter only managed £2,150, the Queens Diamond Jubilee cemented recent gains and settled around £1,120 per bottle – well up on the previous £750 – £850 prices achieved. 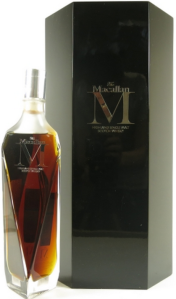 The Macallan ‘M’ decanter is an interesting concept. Unlike some bottles of Macallan, It wasn’t released with the collectors market in mind; it was released solely as a showcase for top of the range Macallan as a drink. I recently spoke to a business associate who asked my opinion on buying ‘M’ as an investment. My answer was to spend his money elsewhere and not to go near M as a collectable or investment… “Too late” came the unfortunate cry. It transpires he’s already bought four bottles! With a lot of patience it might claw back its losses… especially it it’s discontinued at some point in the future.

Twice the price over just 12 months

Bottles from silent distilleries maintained their current positive price trajectory with Rosebank looking especially favourable. A bottle of 1967 vintage 26-year-old bottled by Signatory stormed in at £750; more than doubling its 2014 price of £350. The 1979 vintage 20-year-old Rosebank from The Rare Malts Selection range hit £450, not quite an absolute record (£660 was the ‘spiky’ price paid for a bottle in 2013) but way ahead of its £80 price tag in 2010.

Showing you don’t have to pay many hundreds or, in some cases, thousands of pounds to get on the silent stills ladder, a bottle of Inverleven (a distillery within a distillery) 1985/1999 by Gordon and MacPhail achieved £84; more than doubling its 2011 price of £40.

While many official bottles from Glenlivet continue to decline in value, the older vintage releases from Gordon and MacPhail are moving well. £675 took a 1955/2001 bottle, pushing it well ahead of its previous £450.

In my view, Glenlivet OB values will continue to fall. In terms of buying quality drinking stock on the secondary market, if the new Founders Reserve is anything to go by (tried it, left it, won’t return to it), we’ll see further polarisation between modern OB’s and discontinued IB’s.

Digressing slightly, the interesting conundrum for the Glenlivet Founders Reserve will be to see if it manages to recruit volumes of ‘new-to-category’ drinkers without turning away more seasoned whisky consumers. I fear the bigger challenge may be to get any new recruits to return for a second go…. who knows, I could be utterly wrong and it gets judged the best thing in the world at some award or another.

Back to the numbers and the current surge in Highland Park prices remains unchanged. Earl Haakon hit its highest price since November 2014 and a bottle of 1974 vintage (cask 11501, Viking Cinderella) sold for £750. £410 was the previous price paid for this bottle earlier in 2015.

Showing how rarities often make huge step-change leaps in value when they are rarely seen on the market, a bottle of Connoisseurs Choice 1957 Longmorn 25-year-old sold for £525. That was merely its second time at auction in the UK, on its first outing in 2008 it made £220.

Finally this week, it almost looks like Glenfiddich is giving its gilt-edged sibling Balvenie a bloody nose in the collectors stakes. The Glenfiddich 1958 sold for £4,400, way ahead of its previous £2,350 and even way ahead of the £2,750 it costs in travel retail.

All in all, a good auction with some very impressive results.