Volumes were relatively stable at 5,352 compared to October’s 5,528 and average prices for Scotch look to be edging further north towards the end of the year. More on averages in the 2016 Investment Review released early 2017.

Other than the specific negative indices which track the worst performing bottles, every single key index finished the month in positive territory. As more confirmation certain brands/bottles continue to fall, the Negative100 index slid further into the red, losing 1.43%; its greatest single month dip since Mays -7.46% loss.

The basic principles of the current dynamic market remain broadly the same as they did five years ago with the most desirable bottles increasing and polarisation suppressing values for undesirables. 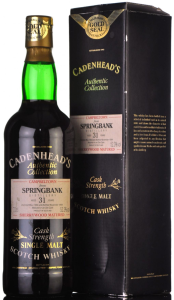 When gems from Springbank infrequently appear on the open market there’s usually a decent amount of activity. Over the past year or so, demand for some of these magnificent older examples has dialed up to eleven.

Born in 1963, this Cadenheads 31-year-old has only appeared on the market three times. Scant surprise then, when Whisky-Online Auctions unearthed one, it rapidly disappeared into the stratosphere from a pricing perspective.

Rather more frequently seen on the open market, the blue label Macallan 30-year-old managed a new record of £3,500.

The Month in Summary

Port Ellen (OB) prices continue along their unpredictable peak/trough sawblade-esque trajectory. Down 15.85% in October then bouncing back in November to increase 16.46%. A 2016 year to date result of +38.19% shows the general trend is still very much up.

As the third greatest gainer in November, Karuizawa appears back on the radar. Novembers increase takes Karuizawa out of the red for 2016 and gives a marginal year to date positive performance of 6.01%.

And then there was Macallan!

The current surge in values is so out of line with anything we’ve ever seen before. We still maintain this market is unsustainable. That said, every month we seem to keep witnessing further increases, especially to the vintage 18-year-old bottlings.

Now, while the current increases look almost incredible, an average of £4,000 per bottle would be madness… but with the current trajectories, that’s how out of line the current market really is.

With one more month before the curtain is closed on 2016, it looks like this year will be a record breaker. While there’s still time to see a year-end dip similar to that of 2014, we would see it as unlikely any dip could/would be significantly material… more a pause for breath. The current market just looks too bullish at the moment with demand for rare whisky remaining nothing short of exceptional.