Following April’s record month for the highest number of bottles sold on the open market (4,309), May cooled significantly at 3,304. That’s still a 6.37% year-on-year increase but 27.92% less than last months performance.

Strong demand and further hardening of values in certain areas of the market was ever more apparent throughout May. Conversely, ever increasing polarisation forced other brands/bottles deeper into negative territory.

Particularly striking was the extreme volatility currently being experienced in the Port Ellen Index. The Rare Whisky Port Ellen Index (RWPEI – covering releases 1 to 8 inclusive) re-traced by -0.94% during May. Not in itself a disaster; however, three month yields for this index currently stand at -20.33%.

Does this signify a marked change in the market for Port Ellen? Increasing volatility and a three month loss of 20%+ warranted further research.

The chart below shows the (OB) Port Ellen Index alongside a selection of independent bottles (20 bottles were randomly selected which have regular sales on the open market). 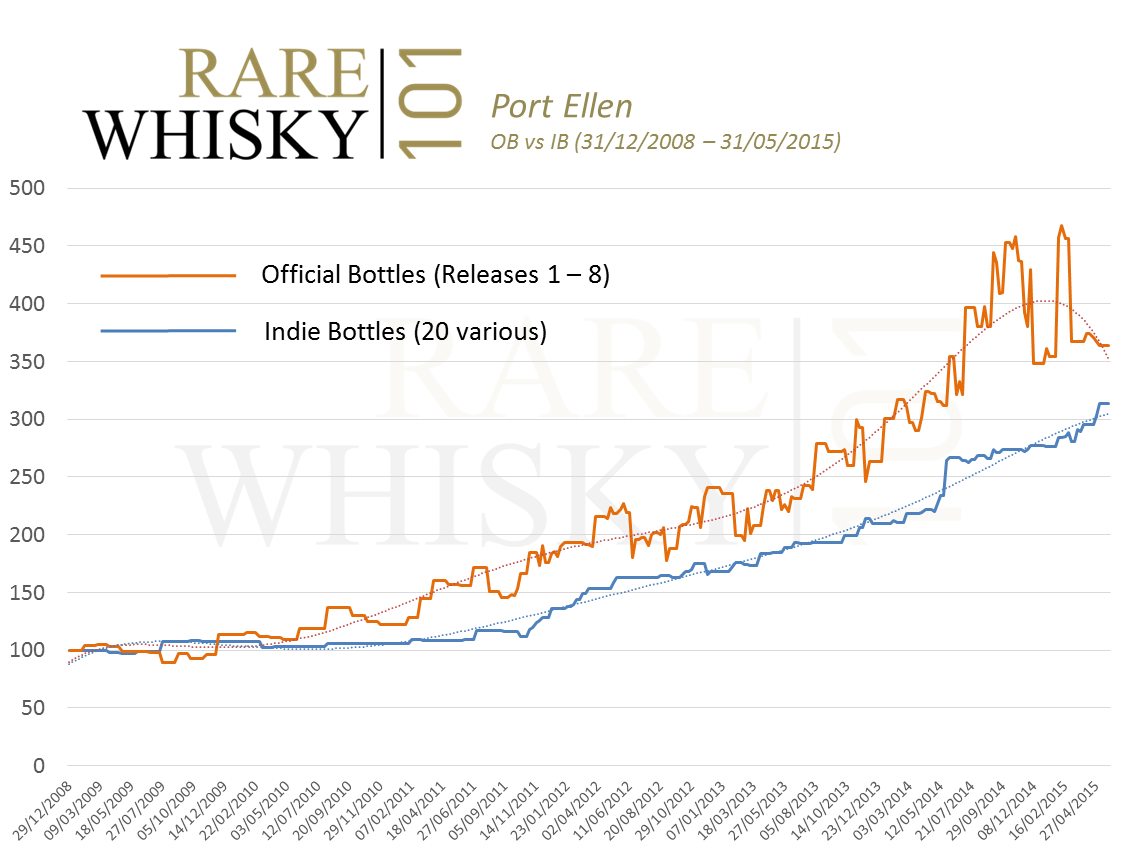 There are a number of reasons for this stark contrast. As we’ve highlighted in previous updates, the most prominent reason is the erosion of perceived primary market value for the official releases. Secondary market buyers are turning away from the OB’s to pursue better value among the IB’s. The average price of the OB’s remains significantly higher at £809.70 versus £302.50 for the IB’s.

To a lesser degree, Brora mirrors this trend. The Brora OB Index was the worst performing Rare Whisky index throughout May losing 2.89% (three month numbers see an increase of 2.15%).

Japan remains an almost permanent fixture at number one. Following April’s 26% increase for the Karuizawa Index, a rather more sedate but still impressive 11% uplift was observed in May. We sit on the fence in terms of future gains for Karuizawa. Such rapid increases generally suggest there will be an equally rapid re-trace (or at best a period of stability); however, the lack of available product and ever increasing demand could equally mean continued upside.

The benchmark Icon100 index showed a small loss for the month, closing down 0.49%. A decline in through-the-month sales for many of the bottles resulted in this relative stagnation. 14/100 bottles increased in value, 74/100 bottles remained static and 12/100 bottles decreased.

The Rare Malts Selection Index took a marked 5.53% uplift. Very positive in isolation, this should be viewed as something of a spike driven by a small number of rarities which sold for huge record amounts. That said ‘a rising tide floats all boats’ and we’re starting to see some of the less desirable bottles in the series move up alongside the ‘big’ bottles. The average per-bottle price of a full-house of the RMS series at the end of 2014 was £375.80; that now stands at £417.10. 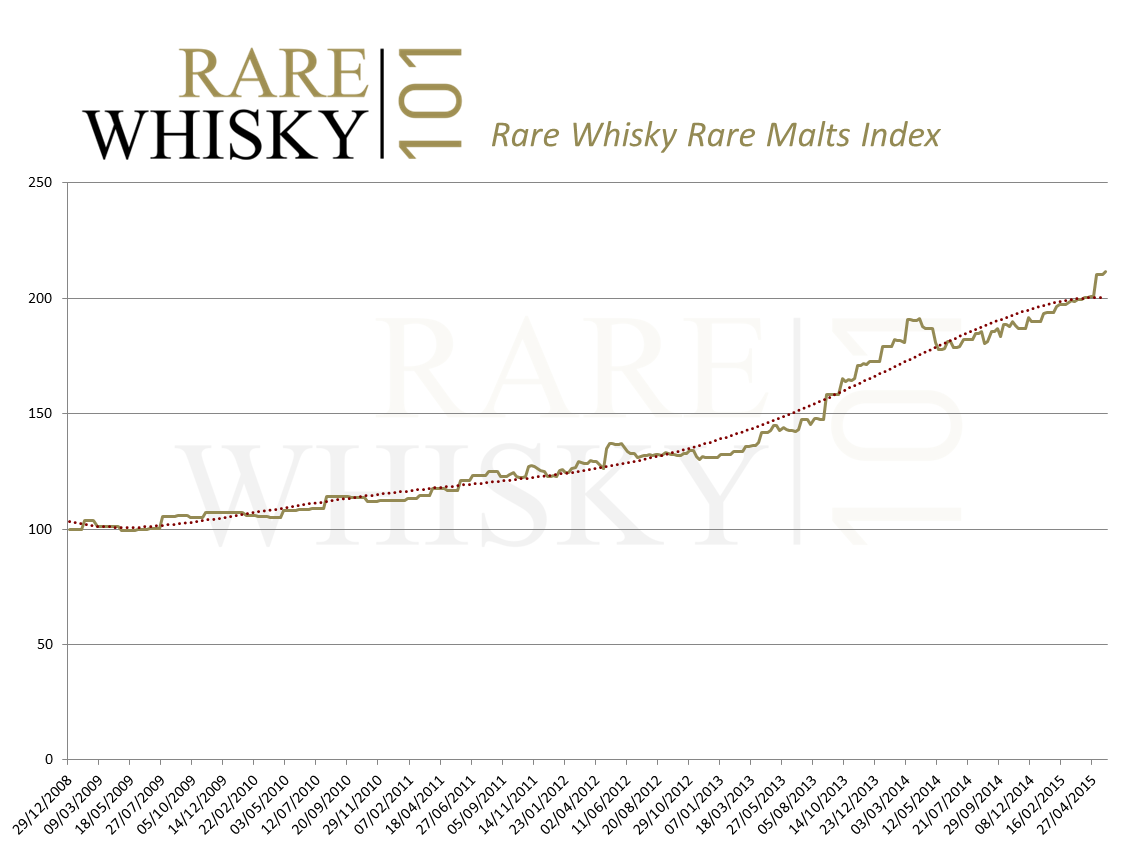 Solid growth for the Rare Malts Selection bottles. Are May’s increases a spike?

In common with previous months, Macallan 18 and 25 year olds saw values harden. In contrast to this performance, we’re seeing increasing stress for recent releases. The separation in performance for older discontinued Macallan bottles bearing an age statement/vintage, (hypothetically) appears to be a driving force in the ever widening divide with the poor performing non-aged contemporary releases. Further detailed analysis is required to prove/disprove the collectability of aged/vintaged Macallan vs non-aged. Perception as to the quality of the liquid, however personal and ambiguous, also has to be a factor. We plan to fully review this later in the year. 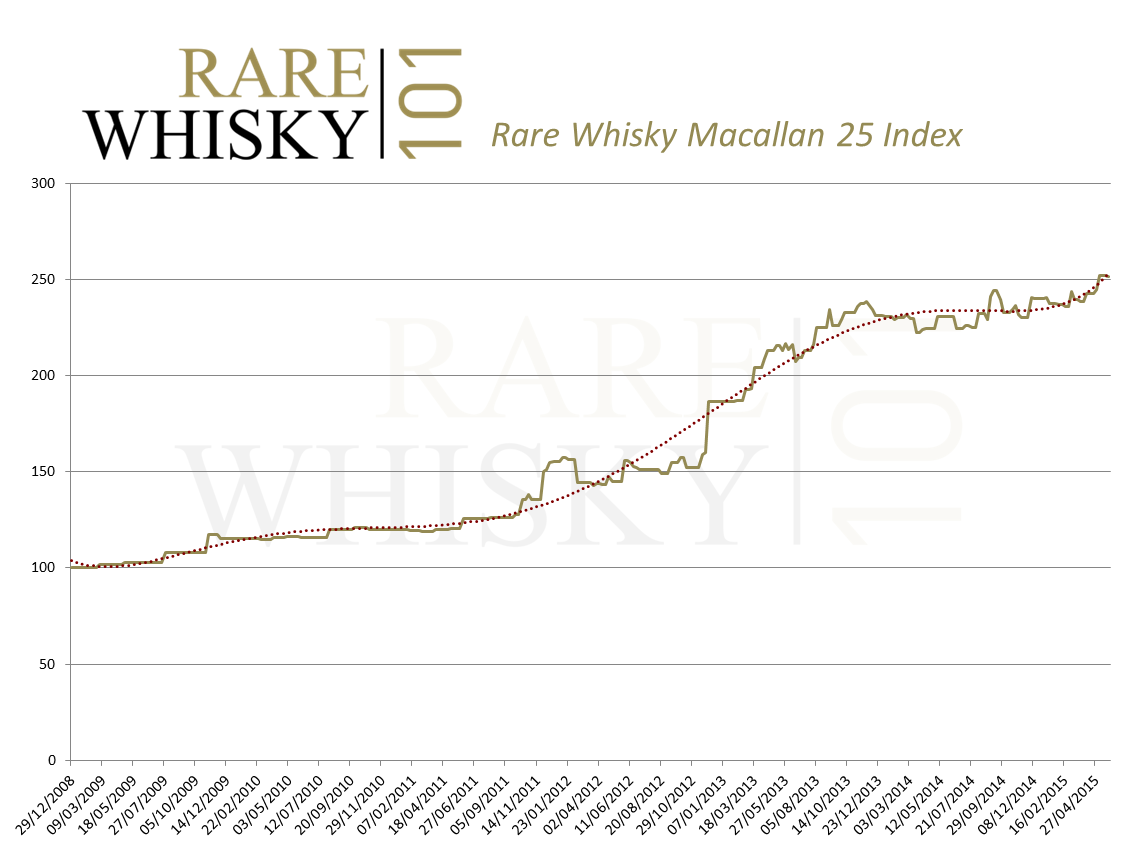 Aside from the composite indices above, the rare whisky market in general appeared positive. The Apex1000, Apex250 and Apex100 indices were up 1.50%, 2.40% and 0.86% respectively. The negative indices continued to remain at all-time lows. 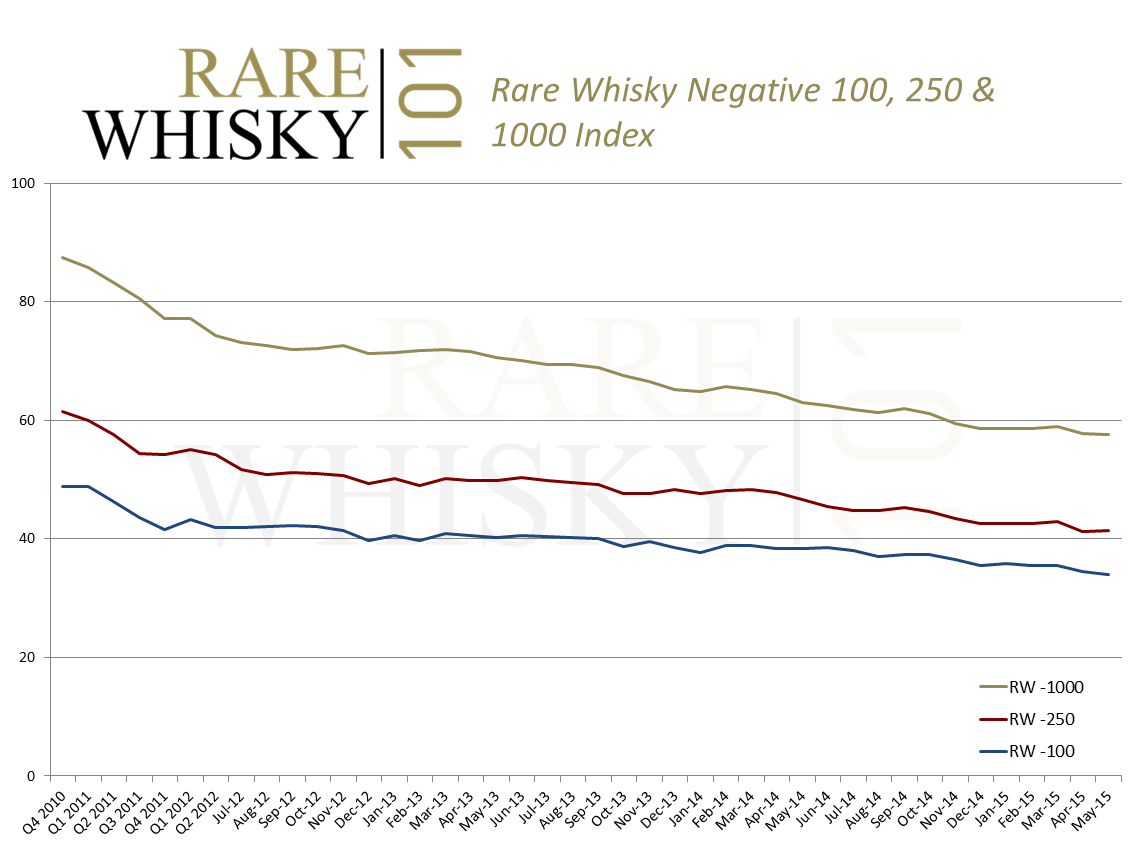 Negative Indices continue to be governed by bears.

As we move to the half year review stage at the end of June, the sheer number of auctions selling rare whisky throughout the month is vast; we’re expecting record/near-record volumes to be seen. These volumes could have a marked effect on the perceived value (or lack of it) for certain brands and certain bottles.

We look forward to sharing the results in due course.